Am back in the UK now, after a blissful week travelling around the western ghats and Indian Ocean coastline relaxing and trying to get a tan. I have managed to get a good hand tan, but my face just looks dirty. I am slightly concerned that it will in fact all wash off in the bath, which makes me reluctant to have one. Think it's getting to the point I need both metaphorically and literally to take the plunge. All in all this trip was much more of a success than I ever expected. I was quite pessimistic about what I would find, how I would be greeted and what I would do, but in fact it has surpassed expectation. Of course, there was the minor hiccup of no-one knowing I was coming, but I was half expecting that, given previous form. However, unlike last year, they did seem more pleased to see me! Once the initial hurdle of getting my room ready, everything was fine. In fact there were some advantages to coming unexpectedly because no-one polished things up to present to me, I saw it all in it's unprepared state and the elderly centres really have a life of their own now and look like being an easily replicatable model. The group from Bishopston in Bristol, who are setting up a play and teaching resource centre want to use one of the spare rooms for a similar elderly welfare . The exciting potential consequence for this is that there will be a juxtaposition of the elderly and very young. One of the ideas about the sustainability of the first centre was to use the physical presence of the elderly as a kind of baby sitting/creche service. This did not seem very culturally acceptable at the time, but the propinquity in the Bishopston centre may result in a natural evolution of this, making it much more acceptable and therefore, potentially be used in other areas. So another really exciting avenue is opened and we will see how it develops. In addition to this, building works have actually started in the new centres, there will be a "Grand Opening" in August (ploy to accelerate the building works), which will give me an exucse to come out again (hurrah), although for a shorter time (boo). Here are some pictures to show works in progress. 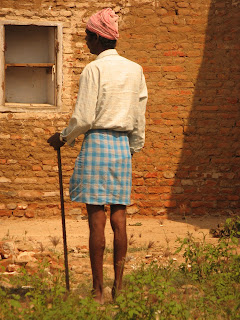 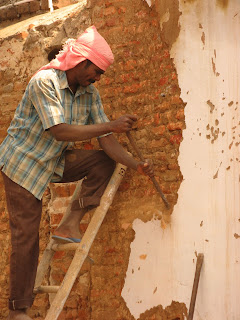 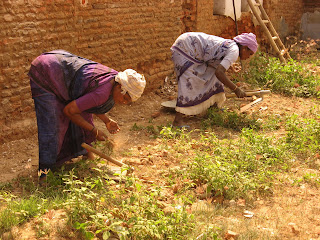 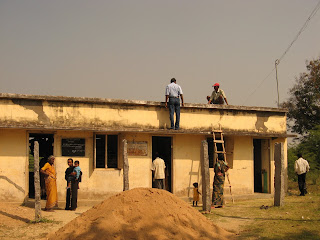 Of course the other interesting development is the mental health project proposal. During my last couple of days there I attended a couple of lectures on mental health in the community which were fascinating. Suicide is a huge problem in India, although studies suggest that unlike in the UK, the proportion which are due to mental illness is only about 1/3, meaning 2/3 probably commit suicide for socioeconomical reasons. In addition, unlike the developing world, more women than men commit suicide and of those there are 2 peaks, the first, horrifyingly, is in the 15-25 age range and the second in the >65y olds. This is such a waste of life. Most people who commit suicide do so through quite definitive and likely to be successful means - poisoning, eg organophosphate poisoning, drowning, hanging. The implications of all this are that there need to be significant population based approaches to prevention, for example more sociostructural support, outlawing of poisonous substances etc, rather than simply measures targeting mental health, because these measures would only capture a small proportion of people who commit suicide.

Interestingly, the lecturer mentioned, as an important strategy, the need to map community assets. Very excited I went up to him afterwards and asked what research had been done in this area. None, he said. Ah, well, that is both disappointing and thrilling. I look forward to cutting a wave (or falling flat on my face!)

*attr. Lot Onslow in sms circa 2007
Posted by Arabella Onslow

Now that we're back in Blighty too Arabella, I've had the time to read all your blogs and find them really interesting. Glad you like the combined centre idea. I spoke to Dr Rita about the suicide rate- she said she'd published something in the Lancet some time ago- must look it up. She too seemed to be saying you need to change social attitudes. There seems not to be a taboo and people think it is a solution to social problems and to family disagreements. Was interested in the suggestion from our teacher about creating youth groups who might use our centre. I guess at v least it wouldnt do any harm for young people to talk to each other- though you would have to be careful to have support e.g from RUHSA. Am already thinking of when we can go back! love and will keep in touch Sally