I feel chastened. I was too busy having a great time in India to keep the blog updated and although I did go out there for a holiday (driving from Vellore, Tamil Nadu to Chamba, Himachal Pradesh) I also did some work so I stand corrected about my neglect.


Ostensibly, I went out as part of my cunning plan to "encourage" RUHSA to finish the building works on the CHEW (Community health education and welfare) buildings in which we were planning to start two other elderly welfare centres. Ie, the cunning plan was to announce a Grand Opening (with photo opportunities) in order to create a deadline to be met, rather than an open-ended timeframe. Oringially the Grand Opening was planned for August, then it was moved forwards to July and finally, much to the distress of those whose responisbility it was to actually deliver the goods before the deadline (ie not the person who was swayed by the thought of the photo opportunities) it was brought forwards to June. So the date was set that two trustees, Dr William Cutting and myself, would come out to open the CHEW buildings at Kovasambet and Sholamur respectively on Monday 22nd June. William would then go on to other meeting whilst I went on to other fun.


Prior to going to RUHSA, I met Celine, who has the women's refuge centre/Home of Compassion in Bangalore. We are trying to set up a website for her so people can donate money to her work. Her aim is to establish a core capital fund, from which there would be interest and income generated to enable her pay for any children's schooling, so no-one remains disadvantaged by circumstances. So far she is already paying (with some sponsorship) for about 7 children's schooling. And she is fussy, the cheapest school will not do, she wants the best. This still only costs about £300 a year, but that is a substantial amount to find if there is no income. She also thinks it is important for women to have some possessions of their own to take into a future marriage with them, even if this happens many years after they leave her care. As these women usually arrive with nothing, the only person who can provide these - usually it comes from the brides family - is Celine, who becomes their new family, often. As soon as the website is up and running I will post it. It is looking good so far.


RUHSA had planned a full and interesting day for William and myself. 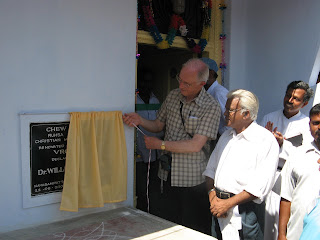 In the morning, there were the ceremonial openings, Willam opened the building at Kovasambet and I opened the Sholamur building. I even have a plaque which was revealed by pulling on a little curtain! After I opened the curtain I had to cut the ribbon into the building. 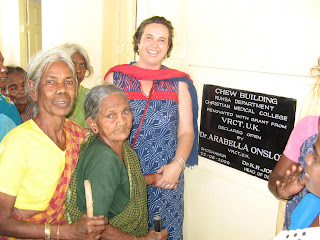 Unfortunately, someone had forgotten to arrange for a pair of scissors, so for a while, I thought I would have to improvise and gnaw through the ribbon with my teeth. Eventually, with much puffing and panting, a local teenager ran back from the village carrying a huge, blunt pair of comedy scissors. It took a while to get through the ribbon. I think my teeth would have been better and it wouldn't have given me RSI on my wrist.

We also visited the original health centre where the elderly are enjoying the fruits of the goat scheme. Several goats have had two kids, enabling the owners to give one back to RUHSA as part of the pass it on scheme but also sell one to make money. I was a bit concerned that we might simply have generated a means of causing several fractured neck of femurs, as the goats yanked their frail owners towards something tasty looking (see left), but apparently they all know when to let go of the rope. The picture on the right shows a couple of generations of goat owners. 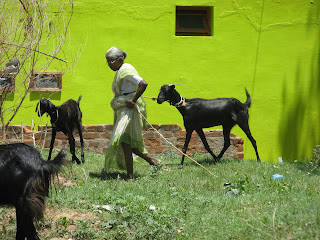 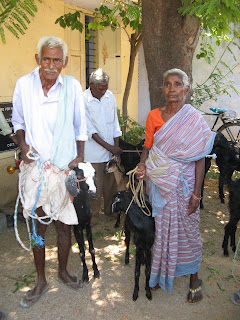 After the Grand Openings, William and I had a series of very interesting meetings with Dr John, Dr Rita and the RUHSA team. There are several very exciting new projects on the horizon, the two most gripping for me are the mental health developments and the microfinance project. Mental health has been a significantly under-resources aspect of health (sound familiar) and of course there is some serious pathology out there. I heard about two twin sons who have developmental delay and mental health problems and who are now physcially grown men. the only way thei family can manage them is by tying them up every day to prevent injury to themselves and to others. The first phase of the mental health project is to identify the most serious, behavioural pathology and treat what is possible. This is already starting, but there is a great need to harness community support, because medical treatment is not the complete answer. So Annie, who is one of the Community Health Physicians, is trying to develop programs to utilise community resources to increase the management options for people with mental health issues. I look forward to getting involved with that in January.
The microfinance project is also very exciting. It capitalises on the uniquely uncorrupt reputation of RUHSA and the relationship of trust between RUHSA and the local community. The plan is to create a Federation from a few of the most successful self help groups and using funds from the VRCT Trust, enable them to loan small amounts of money to local groups who want to set up their own SHG. RUHSA would not be in charge of the money, nor indeed be giving the money, but passing the donation on according to the small business proposals. The Federation would then be responsible for collecting the repayments. Part of the agreement would be that they would have to contribute some of the money recouped for local charity projects, thereby reinvesting the moeny into the community - eg keeping the elderly welfare centres running, but would then be able to keep the profits, whilst not losing the capital. It is a brilliant idea and only one which can work because of RUHSA's long history in working for the local area. By january, I think there may be some real development on this.
As for my holiday. I won't bore you, but I had a great time. The middle of India was very hot (52 degrees C) and the top of India was very beautiful. It was too short, but not long before I go back again. I think I'm addicted.
Posted by Arabella Onslow

Dear Dr Arabella, I have hoped to reach you by e-mail. I am part of a small group of people in NC USA who support Celine, we have been trying to organize her supporters and connect them so they can be effective. What is the status on the web site, can I help? Please contact me at giwhizprints@aol.com thanks Marcia Elliott.