On my second day in India a very exciting thing happened. I saw my name in print for a chapter on Primary Health Care I had written on the basis of a chance encounter in the Indian Embassy in Sri Lanka in January 2007.

Whilst waiting for my visa I went into a waiting room with one other person who happened to be a charming physiotherapist from England who was working on for an NGO dealing with prostheses (false limbs etc) and orthoses (walking aids, braces, supports etc) for people with physical disabilities, amputations, cerebral palsy and the like. We got chatting because her work sounded so interesting and of course being out here doing stuff too we realised quickly that we had a similar philosophy of enablement. Sadly she was not coming back to India for long so I never had a chance to meet her again in Bangalore, but we kept in email contact over the years and at some point she asked me if I could write a chapter on primary health care for the training manual designed for the rehabilitation therapy assistants at the Mobility India Centre, in Bangalore, who are less skilled than physios or occupational therapists, but who are very practical and needed a practical & philosophical overview of primary care. Absolutely not, I said, I was really sorry but I had so much on I couldn't possibly. Ok, we won't re-write it, but could you proof read and revise the existing chapter. I felt capable of that and agreed to do that. You might imagine what ended up happening. It was so paternalistic & impractical that I ended up re-writing the whole thing. The whole project was very interesting and made me think about primary care in a more cohesive way in order to try and convey the principles to non-medics, whilst giving them some simple skills to deal with potentially complex situations and on Tuesday, I got to see it published. Very, very exciting. There is now a textbook in which I am a credited contributor. The whole manual and indeed the whole centre in Bangalore was fascinating. Truthfully, I think my chapter is probably the driest and least interesting, because the rest of the textbook deals with the very practical issues of managing and coping with persons with disability. Or as they call them over here PWDs - not sure what I think of that.

Physical disabilities can for simplification broadly be divided into amputations and  cerebral palsy. As might be imagined, the pathology in India is profound, so children, or indeed adults with CP rarely have simple or exclusively motor disabilities, they more usually have profound learning needs as well, so the isolation of physical disability from mental disability is difficult in terms of management. Mobility India or other agencies dealing with physical enablement, must also train their rehab assistants to manage these physical disabilities within the context of learning difficulties. New to this book is also a chapter on mental health both the effects on the carers and the effects on the individuals with disabilities. It has been interesting working with them on that too, because although the idea that a carer has any needs at all is new, the "fixing" culture still very much prevails, ie we need to get them back to functioning as carers again otherwise the whole family suffers, rather than creating a supportive environment for the whole family to prevent mental health crises from happening in the first place. But these are easy philosophies to set into motion, because as soon as you explain it, it is obvious how important that approach is. Putting it in a text book to create a new learning culture encompassing this philosophy is very exciting.

As well as the problems with CP, there is also a lot of fieldwork and RTA injury leading to amputation, so there is a large demand for prosthetic limbs and one of the most interesting aspects of the visit to Mobility India was seeing the Jaipur Foot being made. It is a very cheap, lightweight, prosthetic foot, moulded for some realism, originally made of tyre rubber, but now it is  alsodeveloped in polyurethane, which does increase the cost slightly, but is longer wearing. . It was co-invented (in Jaipur) by and orthopaedic surgeon, PK Sethi and Ram Chandra Sharma (not related to Simon) who thought of the idea, allegedly, when his bicycle had a puncture. It was developed in 1969 and it's 2 USPs are that it is incredibly cheap to make (480 rs, about £7) and it is flexible, allowing walking without aids on a prosthetic limb. Although it has no articulation, being made of rubber it flexes with gait and even on uneven surfaces which fixed rigid limbs cannot do. It has enabled millions of people, including those with limbs blown off in Afghanistan to walk again. At MI, they have lots of different options, and they showed me another foot which looked similar but was made of a polyurethane shell which could be changed without the need for whole new leg, but the cost was 100 times more. 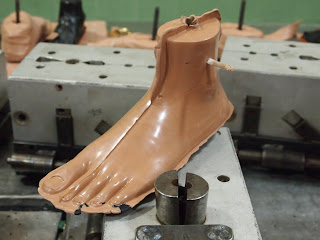 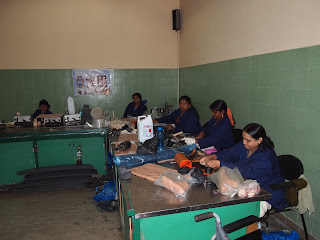 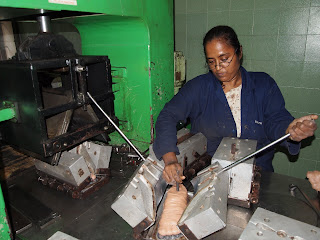 Mobility India as an organisation is one of many, many individual NGOs working with physical disability. It is fascinating to learn of how poorly such organisations collaborate and co-operate with each other. They are doing such amazing stuff individually, but on the face of it there is no network to share ideas or resources. Of course in the UK, there is a social welfare system that provides some kind of baseline collaborative and universal access. Of course the funding is largely centrally determined, whereas NGOs are essentially competing for the same pot, which means that they are more likely to need to be independent, but of course, the result is that the service provided to the people of India is very patchy. If we feel hard done by in the UK, by the postcode lottery, the problem is magnified a million times in India. Those who benefit work such as MI are lucky and few, relatively speaking, and it is not just the individuals who get to take home another leg who benefit, because almost 50% of their workforce have a physical disability, which is a claim few places in the UK can make. Thus, not only is MI enabling individuals to be physically more functional, but they are also offering employment opportunities and providing a visible, functional, integrated front to the rest of the community reducing exclusion and stigma.