From Idea to Movement

Today was the day I came out for. Three members of Friends of Vellore UK coming to RUHSA to hear about their projects and decide which could be supported. In past years, we have had to be fairly directive, often instrumental in the inception and development of the projects, but this year was different. Under the stewardship of Dr Rita, RUHSA has grown up. It is finally starting to realise its potential, which is very great. It is one of the most holistic organisations I know of, with its approach to community health and development. It pre-empts problems, finds problems, educates, trains, supports, heals, provides, empowers and all with generosity of spirit and kindness. Whether you are a woman who needs her blood pressure checking during her pregnancy, or you are a young man with learning difficulties who needs to learn simple activities of daily living, or you are an older person whose family has decided no longer to support you or you are a farmer who needs an interest free loan to buy a cow, RUHSA is able to facilitate you to a better state of being, whilst constantly on the search for new & innovative ways of improving the local wellbeing.

We learnt of their recent successes, heard their new project proposals and listened to their ideas for the future. As so often in India, a circle of opportunity is starting to form, linking different spheres together. The newest proposal laid on the table, astonishingly & co-incidentally, was that of starting up a recreational youth club. The idea was born out of concern for the younger generation of lads who, not wishing to become agriculturalists, like their fathers, but with no additional skills to do anything different except yearn for easy money as apparently available to those on the public media, but lie just out of reach of their sparsely-educated, rural hands. There is a disenfranchised generation of young men who are ripe for the plucking for addiction, domestic violence, poverty & crime. RUHSA seeing this potential on the horizon wants to start a socially inclusive movement which nurtures skills, relationships and enthusiasms for these youths. They may not be a psychologically damaged as Celines lad, although undoubtedly there will be some who are, but the principle of need is the same.

This starting point feels similar to where we were 6 years and 6 elderly centres ago, when we had no idea how we were going to do it, but we wanted to give the elderly people of poor communities a better and more dignified existence in their latter years. Now not only are villages coming to ask RUHSA to help them set up elderly welfare centres, but different countries are starting to sponsor the programs. Three were started by VRCT, the fourth was set up by the Bishopston link, the fifth by FOV Sweden and a sixth is earmarked by FOV Germany (we hope). Wherever we go to these centres, the story is the same, the elderly participants feel more highly valued & content than they have for years. They are enjoying the company, the attention the food and the small income generating programs. I wrote last year of a woman who has saved enough money to ensure she can have a proper funeral instead of the paupers funeral she had been destined for.

These elderly project models are well established now and can be set up very easily. They include 10-40 members depending on the capacity of the villagers who provide the food and cost £126 a year per person for a daily meal 5 days a week. This money not only feeds an older person, but provides an income for women of the village. Today we went to the newest centre set up by FOV Sweden after seeing our flagship centre a couple of years ago. It was an unexpected visit because we had been due to see another one, so they were not awaiting our arrival. A wonderful sight greeted us: children playing in one of the rooms, wriggling around, running in and out of where the older persons were more sedately sitting playing games chalked out on the floor, batting the kids away as they knocked counters over whilst in the corner, the smell of spicy beetroot wafted across the newly cooked steaming rice. So much energy, laughing and chatting emanated from all and wrapped us in their pleasure at being there. The women of Panamadangi village wanted to start this centre; they were instrumental in helping identify the most needy villagers and donated their own building and money to ensure the centre had appropriate facilities (loo). I felt humbled & not some little pride at how our early efforts have become a movement of its own. I hope that, in 6 years time, we are experiencing the same sense of pride and awe looking back at the inception of the youth project. 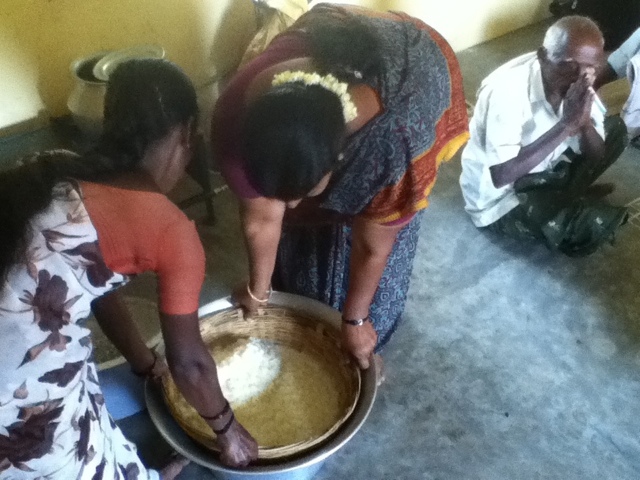 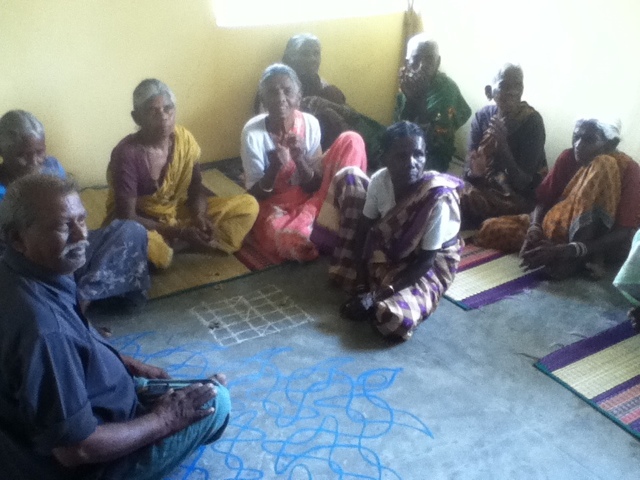 This new centre sounds great Arabella doesn't it! Lovely to hear about the children running about as they do at 'our' centre. All the elderly day centres are much appreciated by the communities aren't they. Great idea FOV started there!

I'm very interested also in the idea of something for the youth. It was my dream that the Patchikillil centre would be used in the late afternoon/ early evening by young people, maybe with a computer or two and Internet access and input via RUHSA to provide some counselling type service. I thought of this because I became so concerned about the dreadfully high suicide rate amongst this age group. I'd be really interested to hear what FOV have decided to support next.