Outline of all Projects 1: The Elderly welfare centres.

As in August, there are 4 EWCs with 100 beneficiaries, who receive a midday meal for 5 days a week. 25 are in Keelalathur and Kovasampet, 40 in Ramapuram and 10 in Seetarampet with the children. In all the centres the beneficiaries are generating a small income from paper bag making. These bags are sold to the College Shop in Vellore for 75paise per bag (abut a penny). Richard was enchanted to hear that because he had, unknowingly, bought some stuff from the very same shop and had, without the penny dropping remarked to himself on the ingeniousness of Indians to recycle their newspaper so productively.

In Kovasampet, they are still struggling with the garden. They are so keen to grow some vegetables, but the blasted monkeys made a mockery of the netting we bought by using it as a trampoline, thereby getting some entertainment until it broke, then they could have a post exertion snack. There are a couple of burgeoning tomato plants which the monkeys are eyeing keenly, but so far they are unscathed. I suggested they used the net for individual plants rather than stringing it up across the whole area. We will see if this fares better, but the keenness to persevere is heartening. As I mentioned before, they are a really feisty bunch in Kovasampet and they clearly relish the companionship derived from the group and sit chatting and even arguing with empowered enthusiasm. They are also adorable about my diminished cheeks. 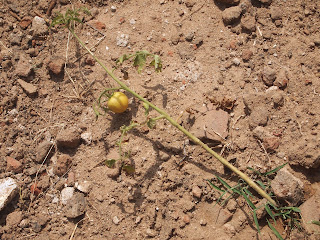 As you can see, the garden attempts are a little sad :-(
Seetarampet is a lovely model and is the baby of the Bishopston innitiative. Here is a link to an adorable video of the children not sleeping and to Sally Whittingham’s blog where there is more detail on the whole project. When I visited Keelalathur, the first centre, again they presented me with a shawl to say thank you which they bought from their own money. I feel bad taking from them when they have so little, but it is also important to be humble enough to receive and to respect their honouring of us.

Today I visited Ramapuram where the SHG is super keen and they are doing well. They are less skilled at the paper bag making and apparently the quality control is lacking so they made less money than at the other centres, but they are a newer and larger group so they may have a little further to go yet. Mathew & I went there today by bus, it is a much further distance from RUHSA than the others so it is visited less often, so they had lots to tell us. Mainly they were asking fi they coud go on an outing to a nearby forest. None of them have ever had the opportunity to visit the forest, much less the luxury of having a picnic, so I have asked Mathew to cost it out and see if we can raise the funds for it. I can't imagine it would be that expensive. It is a very remote village with no rickshaws, so once the rickshaw from Latteri had dropped us off, we were a bit stranded so two of the village boys gave us a lift back to the bus stop by on their motorbikes which excited some comment from the locals. 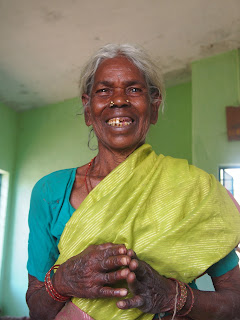 This may be our new poster girl!

The plan now is to identify another area to open a further centre. We have roped in some more sponsors so the charitable income is increasing and the alignment of VRCT & FOV UK also now gives us direct fund-raising potential. I met the director of FOV Sweden who is also keen on supporting the elderly project and has a chair of Elderly Care Homes on his Swedish board who is looking to get some corporate sponsorship. He made the excellent suggestion of linking care homes with a single EWC in India to raise revenue. I had thought of Community to Community sponsorship, but this is even better. I may have to break my Staveley House fast and go there to do a presentation about the EWCs here. I will also approach the head of Risedale to see if they are interested. It’s a lovely idea to twin differing elderly populations. Perhaps they could start writing to each other as well. The letter might have to be translated, but it would be nice to have direct communication.

When Richard was here, we had a bit of a sticky moment about pensions. There is some suggestion that some of the elderly are unable to get pensions because they cannot afford to bribe the officials to get the forms completed. This may in fact not be the whole story, but Richard feels that this is a very easily surmountable problem and offered to pay this money to bypass the problem. I get very uppity about lining fat bureaucrats pockets in this way, not to mention the fact that as the new chairman of a charitable subcommittee I cannot be spending money in this way. In addition, as a fundamental principle, I object to sustaining a corrupt system. I would rather spend the time using clout to get it done properly, which would benefit more than the 12 or so people we know about. So there was not some insignificant friction and controversy. The upshot is that I think right will prevail. Next time I come, I am prepared to go with the elderly along with one of the RUHSA staff as their advocate and shame the officials to do it properly. Sadly, I do not have time to do it this visit. But who knows, perhaps wheels will have turned before then. If I were still teaching medical students, I could use this situation as an excellent example of the different between deontological and consequentialist ethical theory.