Last year one of the most exciting prospects was the idea of working with the SHG Federation, a community organisation formed by elected representatives from each SHG in one area. The Federation acts as an agent for each of the SHGs in applying for, managing & holding funds in order that they do not have to apply directly to the banks themselves. It has the advantage of being a peer represented group who due to economies of scale have greater power than a small village SHG. Peer pressure ensures that people behave with probity because everyone has a vested interest and of course these are elected members who can be stripped of powers if need be. At the time last year, when we raised this with the Federation, they were extremely keen. They helped us develop the model whereby  VRCT donated funds for some goats. The money would be handed over to the Federation who using their local knowledge were to identify a group of women who were keen and able to rear goats  and then organise the giving of goats to these women. When the goats were sold the capital would be returned and a proportion of the profits would be donated to another SHG to manage an elderly welfare program. The advantage of this model for RUHSA and VRCT was that the same money went much further empowering two SHG groups and an elderly group. The advantage for the federation was supposedly that their status & eligibility for government grants increased because you get extra points for social welfare work done. Everyone seemed keen, however, there was a slip twixt cup and lip between august and now and for some reason the Federation backed down.

As a result, RUHSA developed another model and bypassed the Federation by identifying two SHGs directly themselves and acting as goat agents. Interestingly, both groups behaved quite differently. One group have been highly difficult to work with, starting with being tricky about insurance. Apparently, insurance (which is essential, as we found when one group of elderly beneficiaries ate the goats rather than rearing them) requires the goats to have a tag on their ear. This particular village believe that this is bad luck and were cross about the tagged goats. As one might expect with superstitions, it was difficult to persuade them that there was no connection between ear-tagging and luck. Unfortunately, the goats themselves were not helpful and did not work with us on this. One jumped into a well and another one inconsiderately dropped dead. They even attributed the death of an entirely unconnected cow to the ear tagging, thus enabling the women to nod knowingly and smugly and demand the goats be sold immediately. Such was the pressure that the goats were sold prematurely and the profits realised were very small. However, even so, this represents the first formal community contribution to the Elderly Welfare Program.

The second village were more amenable and relaxed about the whole ear tagging business - I think it was helped by their goats avoiding wells and death successfully - but they have been rearing their goats for longer and those who have sold realised 33% net profit, which is a good return. There are still a few women who have not sold yet, who will scoop even more profit. At the moment it is generating small amounts of money only, but it is a start and also it is an attractive fund raising opportunity for FOV, as not only are you enriching the life of the person who owns the goat but also you are providing some social benefits by subsidising elderly programs. Of course the goat does not benefit much, but there's always got to be an underdog.

Overall, the scheme has some promise, but as it is, the returns are too small and the workload for RUHSA staff in galvanising and motivating the SHG women, not to mention the time taken arguing about the relative likelihood of their goat having Kamikazi tendencies because of the presence of an ear tag, has been somewhat arduous and therefore not sustainable. As a result the team have been looking into other options and there is some interest in a goat shed project where there are a group of goats raised by an SHG in a shed. The advantage being that more goats can be reared at anyone time, there is no need for grazing and income is generated not only by the sale of the goats but also by sale of manure which collects below the slatted floor of the raised shed. RUHSA has a space it can construct a shed and an SHG group who can be in charge of it and the income generated can be shared by RUHSA & the SHG.

In addition to the income generated for the projects as a whole, there has been some movement on opportunities for individual income generation. Prabhu, the OT, has initiated some paper bag making in all the EWCs. The materials are free apart from the glue, which is very cheap, the staff are donating old newspapers and the elderly slowly, but efficiently transform them into paper bags, the demand for which is apparently high. For a couple of hours work, when they come to the centre, whilst sitting and chatting to their friends, they can make some paper bags and earns a few supplementary rupees. Below is one of the men using a stick to spread the glue as he wraps the newspaper around a sari box to make consistent, uniform sized bags. 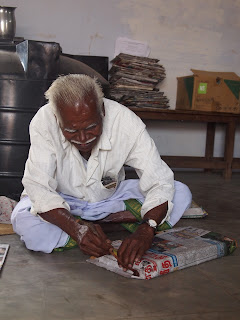 It has only taken 5 years to develop these income generating projects and we are a long way from self-sustainability, but there are even more ambitious plans in the ofing and now I am chairman of VRCT I have at least some say in what we can do. Which is very exciting.

This is really interesting Arabella and helps me understand something of the goat-raising complexities which Doc Rita touched on. My word they do have a superstition for every single event don't they in village India... Bad luck with the suicidal goats and even the cow too, but I guess good enough evidence for not favouring ear-tagging.

My ref to us giggling about goats not getting out much was related to the much favored idea of stall-fed goats- Dr Rita's favorite at the moment for sure. There is talk of us doing it one day at Seetaramanpet but only after we see if the RUHSA scheme works well. Meantime we have to be glad for the few rupees from bag making I guess..