Over the weekend, I have had an extraordinary time. On Friday night, I was picked up by minibus and along with 12 others - nurses, doctors, pharmacists, social workers - was driven 6 hours to a town near the south coast which was hit by the tsunami in 2004. I hadn't been told much about the trip; someone asked if I would like to visit a tsunami village and, not wanting to pass anything up, I agreed. What began to dawn on me over the course of our 6 hour bus trip, was that we were going to a medical camp and that I was one of the functioning doctors. The thought, I must say, was fairly daunting.

As we bounced along the road, I garnered what information I could. We would drive to a town called Sirkazhi, where we would stay overnight, then the next morning we would drive out to one of the villages affected by the tsunami where we would set up a free medical camp for the locals. They expected three to four hundred patients over the day. There were 2 nurses, Frederick & Preethi, three doctors (including myself, who with the female nurse would be expected to see most of the women), two pharmacists, including 2 observing foreigners one, Tammy from Indiana, US and Malin, from Oslo, Norway and several social workers who would organise the flow of the clinic.

We arrived at our lodge at 2.30 am. I shared a room with Preethi, who gave me a crash course in Tamil, in case I had no interpreter. I can now confidently ask if you have a pain and where it is, but am unfortunately unable to understand the answer.

The next morning we arrived at the village and this is the clinic. It was open and you can see that there is nothing between the village and the sea, which lies directly in the distance, as it is completely flat. Luckily it was shady and breezy, but apart from that it was beyond basic.

To the left of the "clinic", behind the Ambassador Classic, under the rusty corrugated iron is the "waiting room". Luckily, for some reason there were nowhere near 300 people to be seen, which was a great relief to me, as any of you who know about my time keeping skills in surgery can readily understand! As it is I still managed to fairly rattle through them compared to in the UK, but my colleagues saw three times as many as I. It was quite fascinating work. There had been an outbreak of chikengunya here, which is a viral disease transmitted by the Denge mosquito which breeds in standing water overnight & bites during the day. The disease presents as a high fever followed by two weeks or more of nasty myalgia & arthralgia. Although it is not fatal, for people who have no access to analgesia and whose existence is hand to mouth on a daily basis, being disabled by pain can impede your means of surviving.

A lot of the problems are psychological as you can imagine, but these are issues which the emergency camps are totally unable to deal with. The very worst cases do get referred to the hospital, but local counselling for what must be an enormous number of people suffereing from post traumatic stress disorder and depression to name but a couple, is absolutely not available. I was told, that the best we could do would be to give them some multivitamin tablets, so they had something to take away and to reassure them. It was as you can imagine very difficult. Everyone I saw weighed 35-55kg maximum (approximately the size of my left thigh I think). All were clearly malnourished and anaemic, what I really wanted to give them was a square meal and some clean drinking water.

After we had seen about 170 people, we stopped for lunch. This was a packed lunch of extraordinary dimensions. We had more food between than probably the whole village had. Each of us was given a carrier bag inside of which were two banana leaf bundles one containing fishand the other rice. There were 4 little plastic bags tied up with cotton with different masalas and sambas - curry sauces. Before luch, there was a pot of water with which to clean our hands. It looked really clean. When I went to wash my ricey fingers afterwards (having eaten lunch with our hands), I noticed three wiggly mosquito larva and a dead mini tape worm. I have been racking my brains to try and remember exactly how wet my fingers were when I started eating. 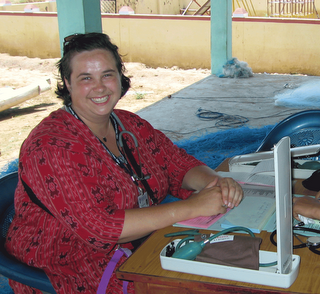 The clinic was much less busy after lunch and as my interpreter did not emerge, the other two doctors saw every one.

On the way home we sang tamil songs, stopped off at the beach and swam in our clothes and then drove home arriving at 3.30am on Sunday. it was exhausting, but amazing. I hope to go again and be more useful next time.
Posted by Arabella Onslow